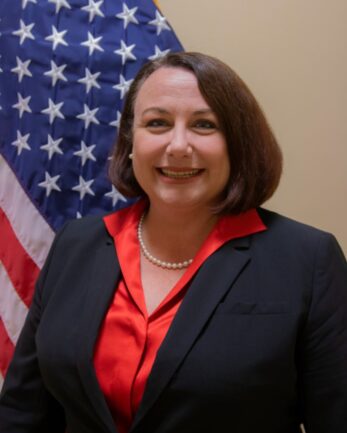 Gwendolyn “Wendy” Green, a career member of the Senior Foreign Service, assumed her position as Chargé d’Affaires of the United States Embassy in Malta in August 2020.

Throughout her more than 20-year diplomatic career, Wendy served in diverse positions both overseas and in Washington, DC.  From 2014 to 2017, Wendy served as the Chief of Consular Services at the United States Consulate General in Dubai, which also oversees U.S. visa services for Iran.  From 2009 to 2011, she served alongside military leadership as the Chief of Interagency Operations and Plans for Eastern Afghanistan.  Her other overseas assignments include Paramaribo, Suriname; Amsterdam, the Netherlands; and Pretoria, South Africa.  In her Washington, DC assignments, Wendy served as a Career Development Officer, mentoring and counseling mid-level Foreign Service Political Officers; as the Chief of Political Military Affairs for Afghanistan in the Office of the Special Representative for Afghanistan and Pakistan; as a member of the Civilian Response Corps in the Secretary’s Office of the Coordinator for Reconstruction and Stabilization; and as Special Assistant to the Deputy Assistant Secretary for Visa Operations in the Bureau of Consular Affairs.

A four-time Superior Honor Award recipient, Wendy also received the Secretary of State’s Award for Expeditionary Diplomacy and twice received the Secretary of Defense’s Joint Civilian Service Commendation Medal.  She earned her Bachelor’s degree from the University of Texas at Arlington and is also a distinguished graduate of the Air Command and Staff College, where she received a Master of Military Operational Art and Science, and the National War College, where she earned a Master of Science in National Security Strategy.  Wendy speaks Dutch, French, Arabic, and some Farsi.

Born in San Antonio, Texas, she grew up around the world as the daughter of a U.S. Army Officer, but still calls Texas home.  She is married to CDR Tracy Green, who is retired from the United States Navy, and has two children, Aurora, 18, and Luke, 16.