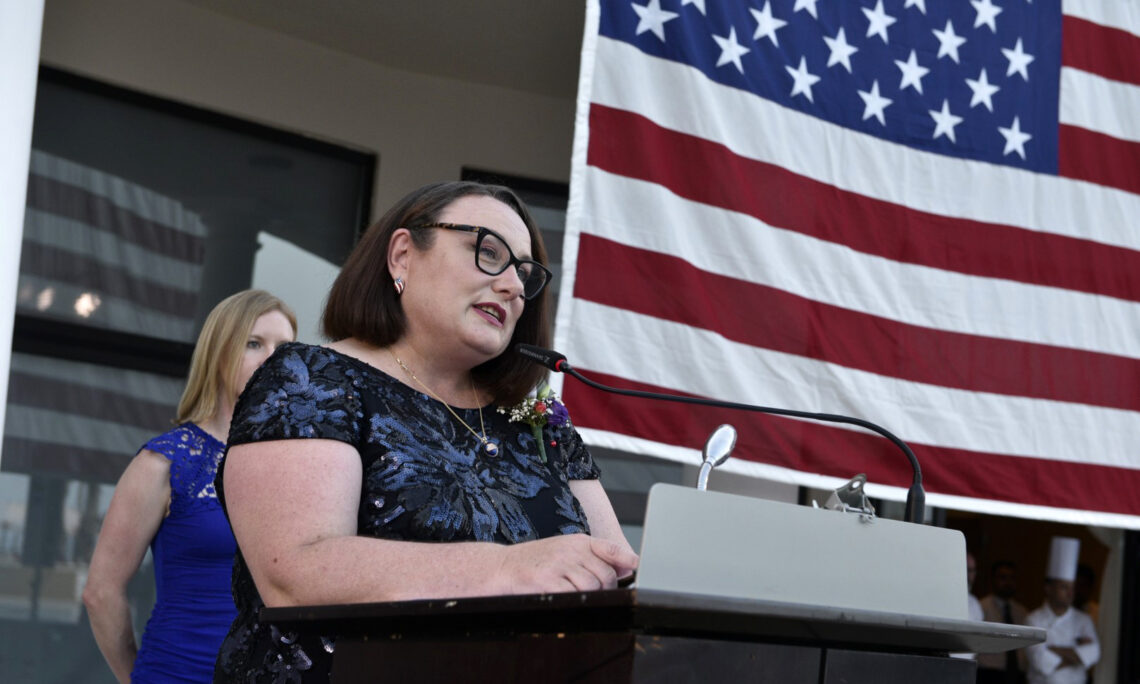 “Your Excellency President Vella, Mrs. Vella, Prime Minister Abela, Honourable Speaker, Honourable Ministers, Excellencies, Distinguished Guests, welcome to our celebration of the Independence of the United States of America. I would like to take this occasion to celebrate the friendship between the United States and Malta in the past, present, and future.

When the United States fought its revolutionary war to obtain freedom as an independent, sovereign nation, nearly two thousand Maltese and Knights of the Order of St. John fought alongside George Washington’s forces.  To express our new nation’s appreciation for Malta’s contribution, Benjamin Franklin awarded America’s first medal “Libertas Americana” to the Grand Master of the Order of St. John, Emmanuel de Rohan.

During America’s Civil War, a Maltese soldier named Orlando Emanuel Caruana enlisted in the Union Army.  He saved a fellow soldier and preserved his regiment’s flag while under heavy enemy fire.  For this brave act, Benjamin Harrison, the 23rd President of the United States, awarded him our Nation’s highest military decoration, the Congressional Medal of Honor.

In 1919, after the closing of the Royal Shipyards here in Malta, Henry Ford visited and recruited several thousand Maltese to relocate to Detroit, Michigan where they worked in his revolutionary automated factories making Ford Motor vehicles.  Perhaps this is the origin of the Maltese love for U.S. muscle cars!

And, in a well-known event here in 1942, when Malta was under siege, the American oil tanker the SS Ohio – a merchant ship, not a battleship – arrived just in time to support Malta in its struggle to resist the Axis forces.  The next year, President Franklin D. Roosevelt visited to salute the bravery and resilience of the people of the Maltese islands.

Of course, in 1989, Malta hosted the historic summit between U.S. President George H.W. Bush and Soviet General-Secretary Mikhail Gorbachev, paving the way for the end of the Cold War.

Today, approximately forty-four thousand American tourists visit Malta each year and the island is home to around five thousand U.S. citizens who live here permanently.  And there are almost fifty thousand Maltese Americans who make incredible contributions to the rich diversity of our nation, including pop icon Brittany Spears, Minions animator and director Kyle Balda, and Presidential candidate and current Transportation Secretary Pete Buttigieg (boo-tuh-jej).  These citizens build the remarkable people-to-people ties that are the foundation of our countries’ enduring relations.

The United States partners with the government and people of Malta through vibrant exchanges, academic partnerships, law enforcement cooperation, commercial activities, and our many bilateral efforts to promote innovation and commerce, the rule of law, and peace and security in the Mediterranean.

And, right now, in this very moment of crisis, a moment that challenges the hard-fought peace and security of Europe and the world, I am heartened by the firm stance Malta has taken against Vladimir Putin and his regime.  Putin’s unprovoked, unprecedented, and illegal invasion of Ukraine necessitates the strengthening and deepening of our already strong transatlantic partnership.  We must continue to assist the Ukrainian people in their time of need and fully enforce the broad ranging sanctions against individuals and organizations supporting Putin’s war of aggression.

We must not waiver in our resolve no matter how difficult it becomes.  We must continue to apply pressure on Putin to stop fighting and withdraw from Ukraine.  Let me put it simply – this is a fight for a sovereign nation’s very survival.  Because if Russia stops fighting – which they can and they should – they simply lose Ukraine.  But if Ukraine stops fighting – they lose their very existence; they lose everything.

Looking to the future, I congratulate Malta for its recent election to a seat on the UN Security Council and we look forward to working with Malta on a broad range of international issues.  Holding this seat positions Malta to lead on today’s global challenges, particularly at this critical juncture as revisionist autocratic powers challenge the rules-based international order.  This is an attempt to move us away from universal values like democracy and human rights that have sustained so much of the world’s progress.  I know Malta will continue to serve as a beacon of those values during the trying and tumultuous times ahead.

Thank you for joining me on this journey through our shared history and outlook on the years ahead.

I would like to take a moment to recognize the herculean efforts of the incredible team at the U.S. Embassy here in Malta for their commitment and vision, which brought us together this evening to celebrate America’s birthday. Thank you, team!

I hope with these remarks you will take away the breadth and significance of the collaboration between the United States and Malta, one that started with the birth of the United States, and one that will continue into the future.

Now I would like to invite His Excellency President Vella to join me in a toast:

To our continued cooperation in meeting global challenges; to the friendship between our nations; and to the health and well-being of the President and the people of the Republic of Malta – Cheers.”