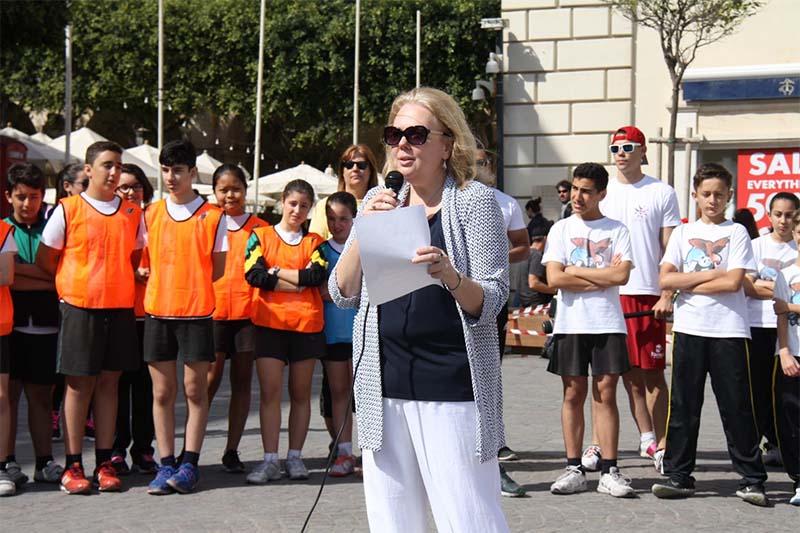 The U.S. Embassy, together with the organization, MOVE, coordinated a morning of sports and games on Wednesday, May 25 in St. George’s Square, Valletta.  This event was part of a wider celebration across Europe, called MOVE Week, which is held between May 23 and 29.  The goal of MOVE Week is to promote an active and healthy lifestyle and reduce childhood obesity.

Secondary school students in Malta participated in a number of activities, including baseball, Capture the Flag, relays, obstacle races and traditional Maltese games.  The Valletta Local Council supported this event.

Acting President H.E. Dolores Cristina, U.S. Ambassador G. Kathleen Hill and Maltese dignitaries kicked off the event by launching a ball in St. George’s Square.  The ball was kicked from one dignitary to another, to the students and the general public.  The general public continued to kick the ball through the streets of Valletta, thus promoting MOVE week and attracting an audience to the events in St. George’s Square.  As the ball travelled around Valletta, volunteers engaged the students with games and sports.

In brief remarks, Ambassador Hill spoke about First Lady Michelle Obama’s Let’s Move campaign and the importance of promoting an active and healthy lifestyle through sports and games.  She thanked the local organization, MOVE, for joining the U.S. Embassy to organize this initiative.  Ambassador Hill said, “Everyone has a role to play in reducing childhood obesity and encouraging a healthy lifestyle, including parents, elected officials from all levels of government, schools, health care professionals, faith-based and community-based organizations, and private sector companies.”